What is it like to live in the City of light? How does one make friends in Paris? Give us your email address and we'll send you some tips!

What does the future hold for mergers and acquisitions activity?

That's one the questions a lot of business owners have always asked themselves for years.

It’s a question we’ve thought about on several occasions at Expats Paris.

After being approached, on several occasions, by small and/or medium businesses that work with and for the expatriate communities in Paris, we’ve always declined these offers because we’ve not yet implemented the entirety of our products according to the way they’re outlined on our products’ roadmap.

With current economic uncertainty and difficulties to access credits or raise funds, we’ve had moments when we were seriously tempted to accept an acquisition.

Acquisition, merger or the fear to shut down.

These are words that usually go through many entrepreneurs’ minds.

We’ve thought about them several times.

We all know that business acquisitions and mergers have become more of a trend than an exception since, a lot of companies in France, have undergone this process. Some of these companies that got acquired include the likes of My Litte Paris acquired by aufeminin and One fine stay acquired by Accor Hotel, among others.

Entrepreneurs usually take a variety of factors into consideration before coming to a decision, and this is way-too-far from a cakewalk.

This post isn’t actually about Expats Paris’ acquisition or merger by and/or with any other company out there.

It’s rather a case scenario for a merger between two of the main Parisian expatriates’ communities. Two main media companies that serve the expat communities in the French Capital: Fusac and The Expatriates Magazine.

What would happen if these two media companies merged?

What would each gain or lose? What value would a potential merger add to the community?

This is just a case scenario and none of this will happen.

Well, no one can really tell what will happen in the coming years!

A little bit of background on these communities and what makes the first different from the second.

At a time when print was still “king of the world,” John Vanden Bos decided to fill a niche.

In 1988, he began to publish a black and white newsletter with classifieds and advertisements every two weeks, catering mostly to the English-speaking community in Paris. 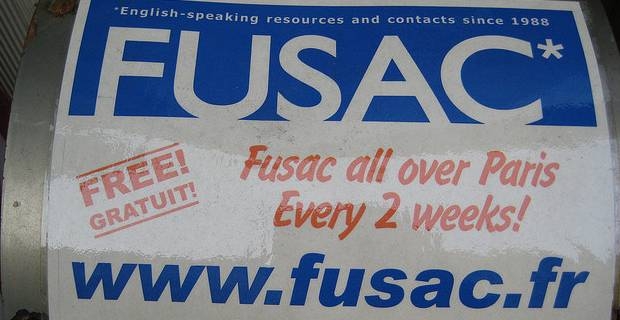 Ten years later, bowing to the sign of the times, FUSAC (France-USA Contacts) launched its very own website.

After that, the newsletter grew and grew, with its biggest issue being published in 2000.

Issue number 500 was published in January 2012. Right now, as I’m writing these lines, Fusac is all web-based and, while catering to its English-speaking niche, has both English and French content.

Basically, FUSAC found a way to still be viable in an age where the internet and electronic media reign supreme.

Books, magazines and news media that were once only available in print are now online and accessible by pretty much everyone.

One could argue that Fusac’s transition from Print to the web came late and with a very old WordPress design, but FUSAC did what it had to do to remain competitive. That’s to embrace brand new mediums of information consumption (internet).

Expatriates Magazine, on the other hand, grew out of a need to serve immigrants living in Paris. It all began with a Facebook launch party in 2011 for the newly minted “Expatriates in Paris,” which was attended by over 300 people. It was a huge success, with lots of interaction, networking and fun between attendees from all walks of life. Six years later, Expatriates Magazine has become one of the leading print magazines for Parisian expats and It’s free!

They have a dedicated staff that, in about 6 years only, worked hard to turn a Facebook party group into world-class Magazine.

As you can see, these two magazines sell almost same services.

If these two companies were to merge, I bet that Fusac would have an honorable exit.

Being an entrepreneur myself, I perfectly understand how hard it can be for any other entrepreneur to let their brainchild go to waste, so one of those honorable ways out is to get acquired or merge. The competition Fusac has been facing over the last five years has been increasing every year and this makes me think that if they wish to keep their business model intact and keep their company running, they’d better go in for a merger.

Without having to lose everything they’ve built so hard for years, merging would actually help them retain the earlier model, enjoy the benefits, all while staying in business.

As a consequence of a possible merger, Fusac, along with all the founders and employees, will get exposed to many new internet influencers in Paris that can be brought in by Expatriates Magazine.

Like Fusac, Expatriates Magazine would benefit a lot from a merger especially in a Speedy achievement of their vision of becoming the leading magazine for the English Speaking community in Paris.

Like every other entrepreneur out there, Kevin Knight has a set of visions and goals he wants to achieve with his Magazine. Sometimes, for him to achieve his goals, a merger may become a necessity. This may be caused by the fact that he might not have been able to reap the projected success in the preordained framework or working model of his Magazine. The process of merging with Fusac might actually induce the needed changes. Moreover, the established Fusac’s carnet d’adresses might just help Expatriates Magazine realize its dream of both informative and paid small ads leading magazine.

A merger between Expatriates Magazine and Fusac might just be the spark that sets the efficiency meter running. A new infrastructure coupled with new heads will bring about that increase in work efficiency that focuses both on business and content production. Whatever be the reason, the process of a potential merger between these two magazines can and would be a very hectic one where these two companies, their skills (old versus young) or even their teams are essentially what are being merged. They’d need to ensure they make an informed decision in which both parties can be able to reap an equal amount of profit for a better future of their readers, clients and the entire Parisian expatriates community.

Do you think such a thing can happen?

And what if it did?

How do you think the owners of these two media companies would be able to deal with such a situation?

I’d love to know what you think. Let’s have a chat down in the comments.

More in this category: « Volunteering in Paris: Why, How and Where to Volunteer. Introducing Paris Talks: A Conference On The Future Of Humanity. »
back to top

Sign-up for our newsletter today and get updated on every Parisian-Expats-related social and economical weekly news, trends and tips.

Do you want to receive some awesome articles about the joys, challenges, and lessons learned from expatriation adventures in Paris every week?

Don’t worry, you can unsubscribe at anytime.