What is it like to live in the City of light? How does one make friends in Paris? Give us your email address and we'll send you some tips!

I started writing this post from Valence, a southeastern French city where I've been invited by friends to spend the Easter weekend. I got back to Paris last night and had to finish it before publishing it today.

Like at any traditional French family mealtime, a few topics emerged going from food recipes, to world’s current affairs via the upcoming French presidential elections.

At Expats Paris, we don’t talk at about current issues, we don’t either write about French political issues.

While discussing with my friends (during this Easter five hours meal), I had a thought about an almost-similar conversation topic I had a few weeks ago with Christian and Tony on WhatsApp. Our conversation brought up concerns over the way French people should vote for. We basically expressed our worries about a candidate that may lead the country to a Frexit and lock it up to itself, throwing away all the cultural and economic benefits it’s been enjoying from its Foreign Policy and immigration, in particular.

Back to the dinner table.

I was asked how I thought the French should vote.

I replied Off topic and I did it on purpose because I believe French people are educated enough to read through their candidates’ programs then vote wisely. I don’t think anyone has the right to lecture people on who to vote for and using fearful vocabularies with an objective of influencing their vote. Lecturing people on how to vote, using non-stop TV, YouTube and Radio News bulletins, opinion polls based on most-searched online keywords and not direct interactions with real voters is a despicable behavior and a crime against democracy.

There’s, however, an issue promised by several candidates in the past, that’s  never been implemented: the right to vote for foreigners. I find it scandalous that people who live and pay their taxes in France cannot have the right to vote in French presidential and legislative elections (Don’t get me wrong. I’m not saying that paying taxes = right to vote).

My friends expressed their sympathy, but I guess that’s all they could do.

Anyway, this post isn’t at all about the rights to vote for foreigners.

I did some research and came to the French Institute of International Relations’ (a French Think Tank that aims at a deeper analysis of international issues) report from a study they recently published, analyzing the programs of various candidates’ most important foreign policy issues.

We chose to focus on the immigration programs only and the following Ifri’s infographic will lead us through the process of understanding easily what they all promise to do once (and if) elected. 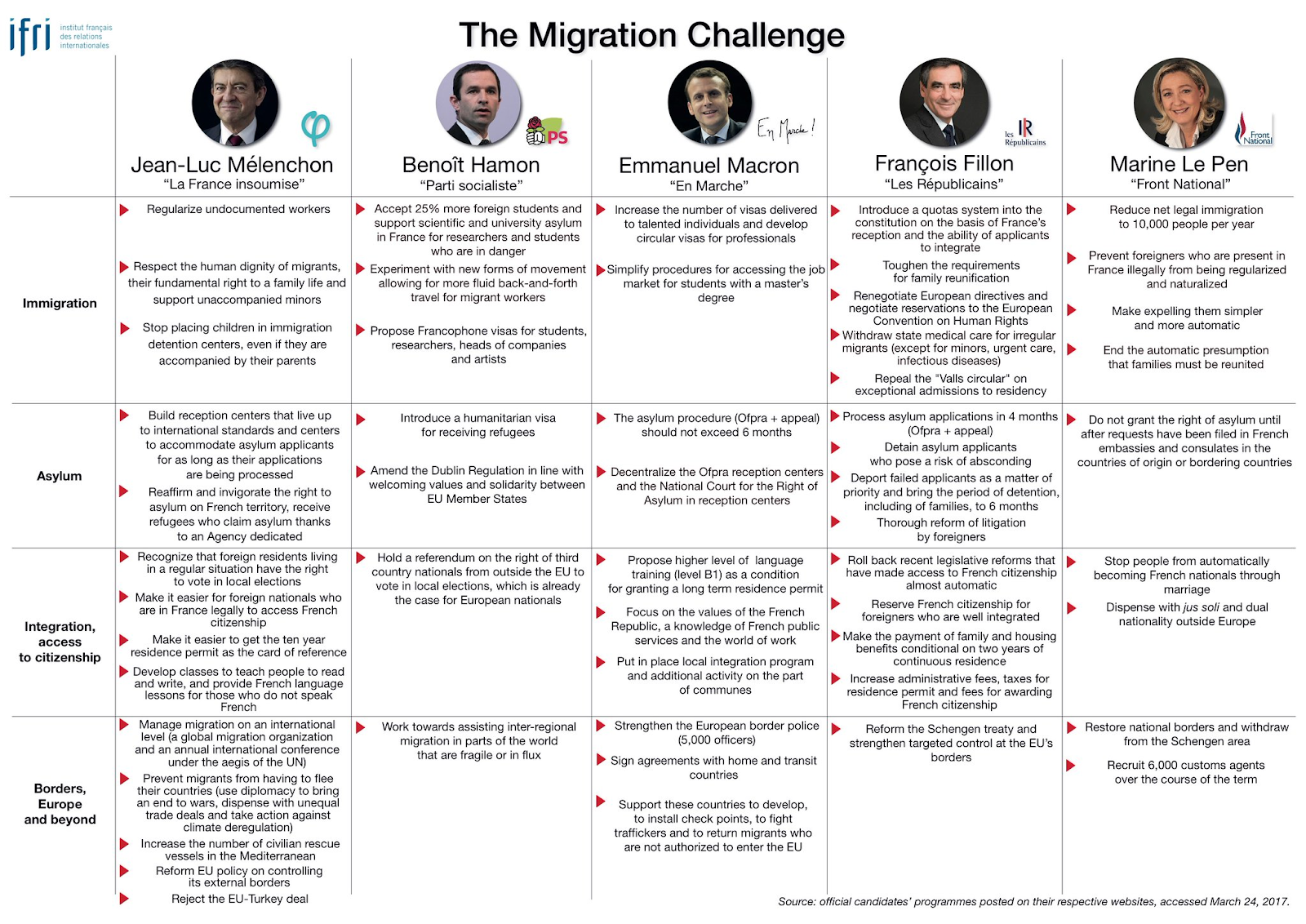 Before we give more details about this infographic, let’s see who the five candidates are (again):

Let’s now look, in detail, what the positions of these candidates are related to immigration, asylum, Integration, and access to citizenship, border protection, Europe and Beyond. This could have an impact on a France-based expat’s visa or documents’ issue or renewal.

These are official candidates’ programs as posted on their respective websites.

Respect the human dignity of migrants, their fundamental right to a family life and support unaccompanied minors,

Stop placing children in immigration detention centers, even if they are accompanied by their parents,

Build reception centers that live up to international standards and centers to accommodate asylum applicants for as long as their applications are being processed,

Reaffirm and invigorate the right to asylum on French territory, receive refugees who claim asylum thanks to a dedicated Agency,

Recognize that foreign residents living in a regular situation have the right to vote in local elections,

Make it easier for foreign nationals who are in France legally to access French citizenship,

Make it easier to get the ten-year residence permit as the card of reference,

Develop classes to teach people to read and write, and provide French language lessons for those who do not speak French,

Prevent migrants from having to flee their countries (use diplomacy to bring an end to wars, dispense with unequal trade deals and take action against climate deregulation),

Increase the number of civilian rescue vessels in the Mediterranean,

Accept 25% more foreign students and support scientific and university asylum in France for researchers and students who are in danger,

Hold a referendum on the right of third country nationals from outside the EU to vote in local elections, which is already the case for European nationals.

Work towards assisting inter-regional migration in parts of the world that are fragile or in flux.

Increase the number of visas delivered to talented individuals and develop circular visas for professionals,

Simplify procedures for accessing the job market for students with a master’s degree.

The asylum procedure (Ofpra + appeal) should not exceed 6 months,

Propose higher level of  language training (level B1) as a condition for granting a long-term residence permit,

Focus on the values of the French Republic, a knowledge of French public services and the world of work,

Support these countries to develop, to install checkpoints, to fight traffickers and to return migrants who are not authorized to enter the EU.

reception and the ability of applicants to integrate

Toughen the requirements for family reunification

Repeal the "Valls circular" on exceptional admissions to residency

Detain asylum applicants who pose a risk of absconding,

Deport failed applicants as a matter of priority and bring the period of detention, including of families, to 6 months,

Thorough reform of litigation by foreigners

Roll back recent legislative reforms that have made access to French citizenship almost automatic,

Reserve French citizenship for foreigners who are well integrated,

Make the payment of family and housing benefits conditional on two years of continuous residence,

Prevent foreigners who are present in France illegally from being regularized

End the automatic presumption that families must be reunited

embassies and consulates in the countries of origin or bordering countries.

Dispense with jus soli (right of the soil) and dual nationality outside Europe.

Restore national borders and withdraw, from the Schengen area

Recruit 6,000 customs agents over the course of the term

As you can see, any decision French people will make on the 8th of May 2017 (day of the 2nd round) will have an impact on the country’s immigration policy and the benefits they’ve been enjoying from their relations with other nations and people across the globe.

Reading this, I laughed at some candidates’ programs. They tend to forget (or just do this on purpose) that it’s uneasy to isolate oneself from the rest of the World. That’s a luxury France cannot afford at this moment.

What do you think?

More in this category: « Top 9 Reasons The French Language Is More Important To The French Than I Once Thought We Stopped Publishing New Blog Posts For Three Months. Here’s What We’ve Been Doing Instead. »
back to top

Sign-up for our newsletter today and get updated on every Parisian-Expats-related social and economical weekly news, trends and tips.

Do you want to receive some awesome articles about the joys, challenges, and lessons learned from expatriation adventures in Paris every week?

Don’t worry, you can unsubscribe at anytime.